On a sunny spring day, Colin Gerner slid into a chair in the quiet group study room of the University Library on UAlbany's Uptown campus. A smile spread across his face as he caressed the upholstered arms of the chair. The memories of this space—what he remembered as "the purple room" — came flooding back: the afternoons spent studying, the inappropriately loud gatherings with fellow members of the business fraternity, Delta Sigma Pi, and the cherished moments spent with his brother, GJ, who inspired Colin to follow him to the University.

"My brother paved the way as the first Great Dane of our family," Colin recalled during a videotaped interview. "I'd visit and got to meet a lot of his friends — got to see what he was doing on campus, and it quickly became known that I was going to follow in his footsteps. I was super proud to follow him to UAlbany."

The Gerner brothers — both graduates from the School of Business — made the most of their time in college; each served as president of the DSP fraternity, established a wide network of friends and interned at Big Four accounting firms which led to promising careers in New York City (GJ at EY and Colin at PwC). Life was good.

Then, GJ had a seizure.

"You're not ready for a call that says your brother had a seizure and he's in the ER," said Colin as tears welled in his eyes. He has told this story many times since that 2017 emergency, but the emotions are still raw and too strong to hold back completely. "And you go through testing and you're hearing doctors talk about the mass they found on his brain. It was one of those things where everything changed in the blink of an eye."

The mass turned out to be Glioblastoma Multiforme (GBM), the most common and most lethal type of brain cancer found in adults. It is estimated to kill more than 15,000 people a year and has claimed the lives of senators Ted Kennedy and John McCain, Hall of Fame baseball player Gary Carter and Beau Biden, the son of President Joe Biden. The life expectancy of GBM patients undergoing treatment is  currently only 12 - 15 months.

Despite those dire numbers, GJ Gerner and his entire family chose to fight back against the disease.

"I expect to live to an old age. Kick cancer's ass, as I've said many times," GJ laughed in a video documentary produced shortly after his diagnosis.

The night before his first brain surgery, GJ emerged from the bathroom with a clean-shaven face except for an uncharacteristic mustache: an acknowledgment that he wouldn't be returning to his office soon. In a show of unity and a nod to GJ's resolve, Colin and his father, George, grew their own mustaches. Others were inspired to do the same and a crusade was born: StacheStrong.

"StacheStrong isn't just a mustache," Colin said in the documentary. "It's a way of how you're attacking every day the way that GJ does. It's a way that when you're told you have an incurable disease...you say I'm not worried about that...you live StacheStrong."

More than just a motto, StacheStrong grew into an all-volunteer nonprofit organization founded by the Gerners and dedicated to raising funds and awareness for brain cancer research. It's the kind of resource that the family wished had existed before their nightmare began.

For more than two years, GJ endured additional surgeries, radiation, chemotherapy, and a litany of infusions and rehab efforts to battle GBM — all while helping Colin launch their nonprofit.

"My brother was fighting an incurable disease and also focused on how he could help other people. That's who he was. That's what StacheStrong is," said Colin, the nonprofit's CEO.  "There's no silver bullet yet, but that's what we're focused on. Let's fund it. Let's find it. But let's also provide hope and support and advocacy for all those people who feel like they don't have a voice when they're diagnosed."

With fundraising events ranging from a national 5k run/walk, NYC Marathon team and golf tournaments to innovative partnerships with more than 250 craft breweries, StacheStrong has raised more than $2 million for brain cancer research and has funded 20 separate clinical trials and grants at top research institutions across the country. These efforts and the tireless passion of the Gerner family have made StacheStrong a leader in the brain cancer community.  Much of the group's early success, Colin noted, can be traced right back to an army of UAlbany alumni, several of whom also serve on the Stachestrong board.

“Through partnerships with more than 250 craft breweries and various fundraising events, StacheStrong has raised more than $2 million for brain cancer research.”
‍
#BrewStacheStrong

"What impressed me about [Colin and GJ] is that they were very committed to the School of Business and DSP early on as students and then continued to be active as alumni," said Norman E. Snyder Jr., '83, CEO of Reed's Inc., the maker of Reed's Ginger Beer.  "Witnessing their strong relationship and dedication, I was touched to be asked to serve as a board member of StacheStrong."

The lifelong connections formed on campus helped the Gerners' face their darkest days.

"UAlbany played a huge part in lifting up StacheStrong from day one because all of our friends in the city who were at different firms and from different walks of life, were our friends from UAlbany," Colin recalled. "I think about my brother's last days, who were the people who came in to see him? His buddies from UAlbany. Those guys who spent countless nights out, countless nights at the library. Those were the guys that were with him in his last days.  I have never actually even thought about it, but that's the UAlbany difference."

Faculty and staff who knew Colin and GJ during their college years say the Gerner brothers made as much of a lasting impression on the University as it had on them.

Retired business professor Joe Sheehan recalls the respect, admiration and love between the two young men; it was something he never forgot.

"As proud as I have been of the tens of thousands of UAlbany students I have taught over a span of 41 years," Sheehan said via email, "none can match the family pride, family devotion, family care and family service that I witnessed Colin Gerner give to his brother GJ, all quite likely because, in his heart, [Colin] always knew that GJ would do the same for him. The StacheStrong program is family commitment at its best."

"UAlbany played a huge part in lifting up StacheStrong from day one because all of our friends in the city who were at different firms and from different walks of life, were our friends from UAlbany," Colin recalled. 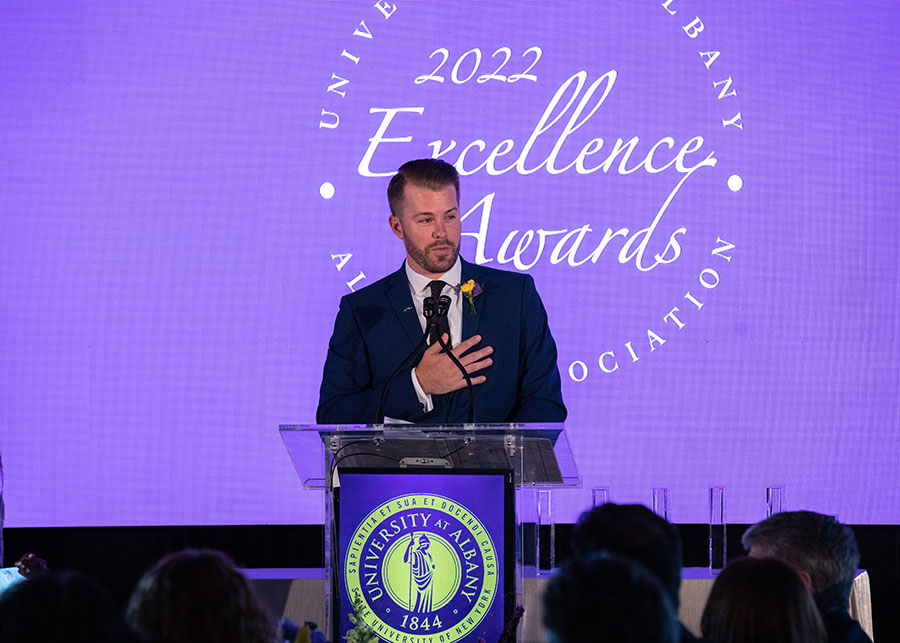 "It's certainly tough to stand up here and accept an award knowing your brother and your best friend was lost as a byproduct of it," Gerner said as he fought back the tears and pledged to continue his brother's fight.

Up against a brother's enduring love, brain cancer may have met its match. 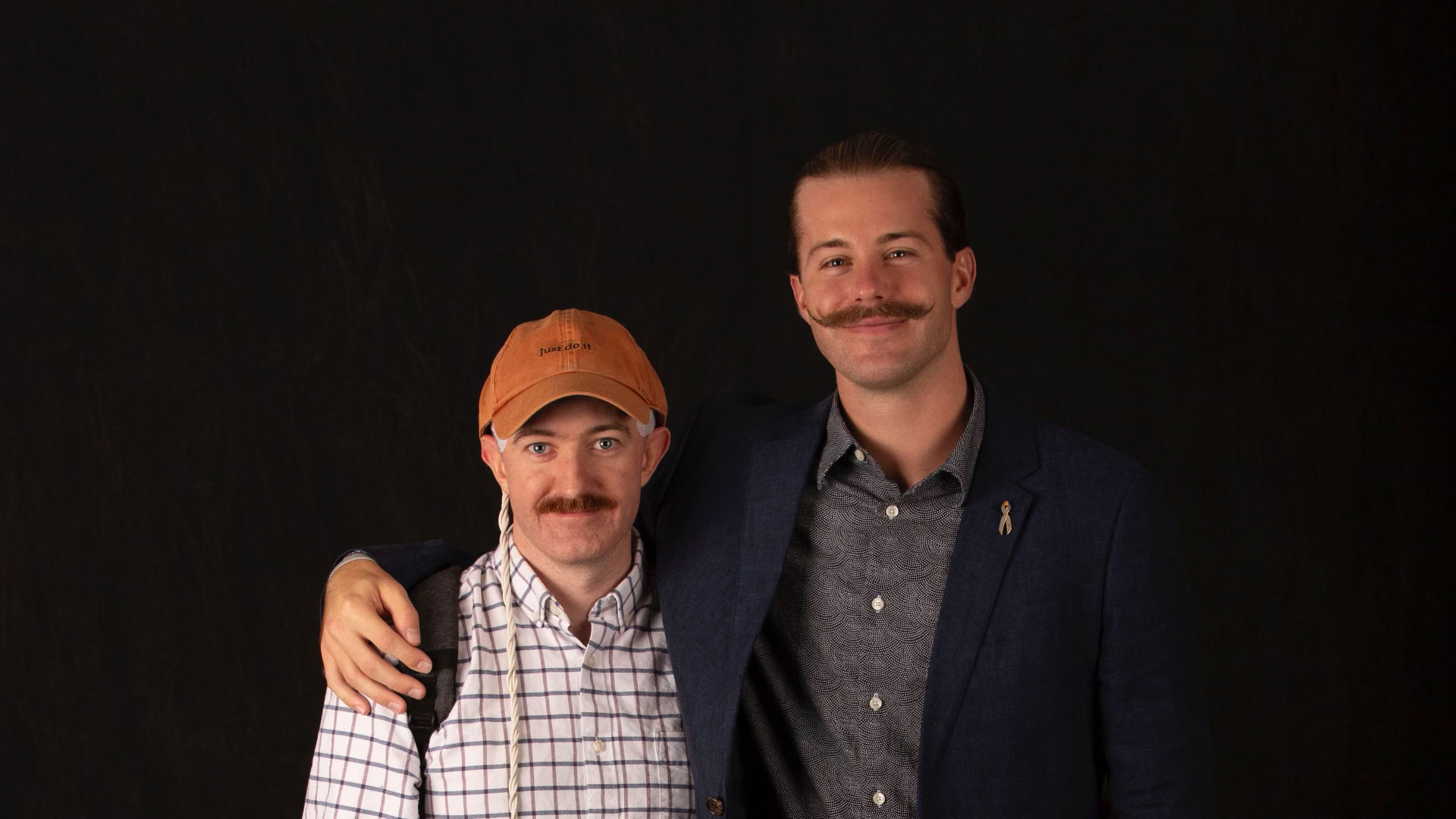 Photos and videos courtesy of: